He spoke at a meet-and-greet Jan. 23 before a provincial election in the next three months.

“We’re all in this for the betterment of Alberta,” Kenney says as he spoke to a crowd of about 60 people.

“We need to fight for fairness.”

He and the new party are eager to defeat the New Democratic Party that formed a majority government in May 2015.

“We need a government that will fight for pipelines and jobs and against the carbon tax,” Kenney says.

“We’ll do everything to bring people in our province back to work.”

He says more decisions for services in communities need to be made at the local level by authorities and managers.

“The order of government closest to the people makes the best decisions.”

He says that may also help High Prairie secure dialysis and other services.

“If that’s a priority for High Prairie, they should be able to do that within their budget,” Kenney says in an interview with South Peace News.

“We will take this very seriously.”

Kenney is ambitious to revive the economy and support economic development in Indigenous communities.

“I want to be an advocate for First Nations to help them move their people to prosperity,” Kenney says.

“Most First Nations are in favour of resource development.”

However, he says, it seems that only anti-development voices get heard.

The election is also important for the province’s role in Canada.

“The fight for Alberta is a fight for Canada,” Kenney says.

He says he is also prepared to fight the carbon tax planned by Prime Minister Justin Trudeau.

Kenney was in High Prairie on the first day of a tour of northern Alberta that started in the Lesser Slave Lake riding.

Kenney became the first leader of the UCP when he won a leadership race in October 2017 after the former Progressive Conservative and Wildrose parties amalgamated.

He expects the local election campaign will be contentious against the NDP MLA Danielle Larivee. 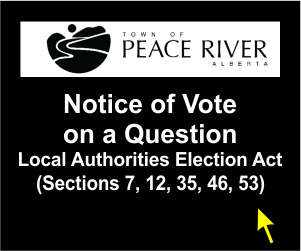